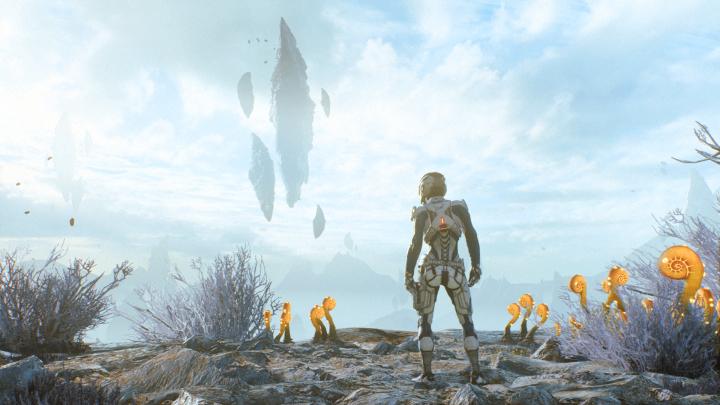 After 58 hours, I have completed Bioware’s much anticipated Mass Effect: Andromeda. ME: A is a vast, open-world RPG that offers ample opportunity for exploration, solid combat, crafting, and an overall fun experience. However, the space opera suffers from a few common maladies typical of franchises struggling to remain relevant in a sea of available RPG titles, some of which are more sophisticated.

I feel the need to throw out a caveat before I get much deeper into this review/reflection. I have never before completed a Mass Effect game. Five years ago, I started Mass Effect 3 but, after an hour or two, stopped playing. I can hear the Mass Effect fans crying out now (I’m sorry!). But it was an issue of time and the game not feeling “right” on PC. I mention this history to show that ME: A is really my first Mass Effect game and that I didn’t go into it with any prejudice or much expectation. After all, I’ve started plenty of games on PC that just didn’t grab me at the time. 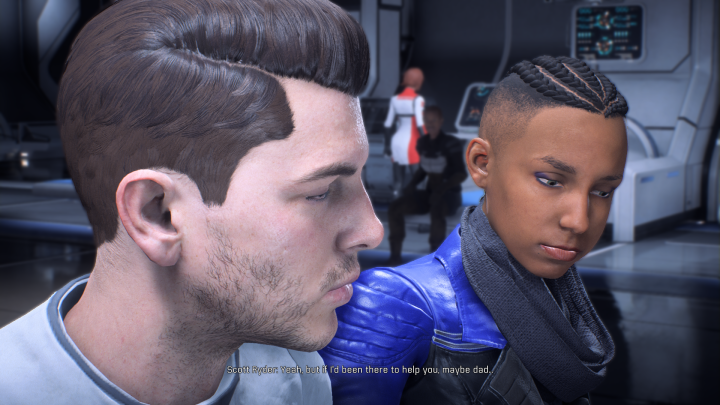 (Minor spoilers of the game’s first few hours ahead!) ME: A tells the story of either Sara or Scott Ryder, depending on the player’s choice of twin. You’re part of an effort to colonize the Andromeda galaxy by way of ships known as Arks. The journey on the Hyperion took 600+ years and results in a rude awakening when the ship encounters a powerful energy cloud. From there, the Ryders, and other members of the ship’s crew that are awake, discover that the golden world they were meant to colonize is nothing like what they had anticipated. A small team led by Alec Ryder, a Pathfinder and the father of Sara and Scott, descends to the planet, Habitat 7, where the team is separated when the shuttle is struck by lightening. They discover an unknown alien race and strange technology on the surface. Reunited, and in an attempt to stop the lightening storm that brought down their shuttle, Alec and Sara enter an alien structure, a monolith, where Sara is hit and her helmet shatters. Alec sacrifices himself to save his daughter who wakes up back on the Hyperion.

From there, Sara becomes the new Pathfinder, essentially a scout and guide who leads the exploration and colonization of new worlds for the Andromeda Initiative. This role also gives her access to a special AI by the name of SAM and to a ship, the Tempest. As Pathfinder, Sara must lead a crew to found new outposts, balance tasks to maintain diplomacy among various factions, and work towards defeating the hostile Kett who are out to “exalt” all sentient creatures (end spoilers).

As an aside, you know your character (as seen on the left) creation skills are subpar when you find several in-game doppelgangers.

Sara can also craft weapons and armor, improve her loadout and the loadout of her companions, upgrade the Nomad (an all-terrain vehicle), romance a selection of characters (leading to an exclusive relationship if desired), and complete many tasks assisting individuals and factions. 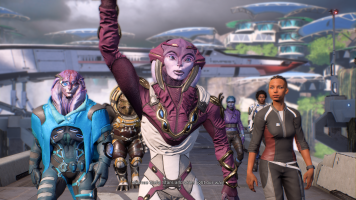 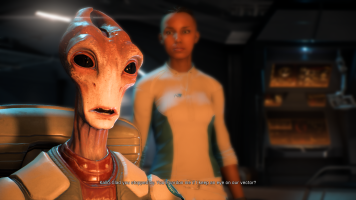 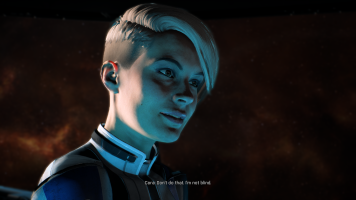 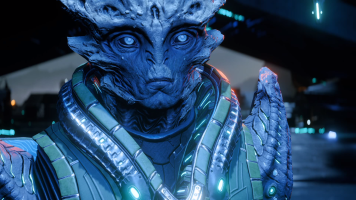 Player choice matters to a certain extent (it can impact relationships and create allies and enemies) and can even prevent the protagonist from meeting certain characters. ME: A gives players enough of an impact on the world and reminds players of the consequences of their choices through narrative changes, messages from characters, and during dialogue.

ME: A sticks with the familiar and doesn’t offer much, if anything, in the way of innovation. It plays it safe. There’s security in that, the recognizable, and what has worked before, but is it enough?

In terms of quality, the game is closer to Fallout 4 than Horizon Zero Dawn. Now, you might be confused by that comparison so I’ll explain further. Horizon Zero Dawn is an exciting and original title that released fully-realized. It has a few shortcomings narratively, but the protagonist is interesting, her story is engaging, the game world feels alive, and the combat is satisfying. Horizon Zero Dawn is a complete game that I cannot wait to revisit when extra content releases. What it does, it does really well. Reviews and forum posts generally reach that same consensus.

Now, here’s where I’m going to differ from some critical views of Fallout 4. Many reviews gave the game 9/10 and other such equivalent scores or ratings. I was absorbed in Fallout 4 for well over 100 hours. I lived and breathed it for months. However, Fallout 4 has some problems. I ran into plenty of glitches, some of which prevented me from attaining collectibles, the graphics were meh, if not downright ugly in some areas, and much of the story seemed contrived. I still hold the belief that the survivor’s relationship with Shaun, the director of the institute, and all that arc entails is just plain weird. Having said all that, I still played for 100+ hours. I had a good time.

What I’m saying is that I can enjoy a game, but that doesn’t mean the game is great. I had fun with Mafia 3 for awhile, but the game has its issues. I’m not saying ME: A is anything like Mafia 3, but they both wilt in the light of more original open-world, RPG games to a certain degree. ME: A isn’t outstanding. As a friend said, “It’s a good, fun, flawed game.”

Another thing that Mass Effect and Fallout have in common is that both franchises have a wide, critical fanbase. Bioware and Bethesda are giants of open-world games. It’s their bread and butter. Because of the status of these developers, they can get a lot of flak when a game doesn’t match the expectations of the players. We’ve all seen what expectation can do especially with the anonymity on the internet. RIP No Mans Sky…

Fans of Mass Effect have some legitimate complaints about ME: A, primarily that the game looks worse than previous titles and that the character animations are terrible. Those critiques didn’t concern me quite as much. Instead, my biggest concerns deal with a lack of originality, the same old same, and the story.

It would have been nice if something was different about the game. I will say that the game is vast. There are plenty of places to go. It’s huge! About halfway through, I briefly worried that I had discovered all of the habitable planets. Alas, I was gladly mistaken. But the flip side of ME: A‘s size is that it is full of unmemorable side quests. Simply put, the side missions are in excess. I could forgive this flaw that plagues many open-world games, but ME: A lacks exciting random encounters, like watching a fight break out among machines in Horizon Zero Dawn, that at least makes a game world seem alive and less pre-determined/formulaic.

Beyond main story missions, everything else can be broken down into one of several side quest types: Heleus Assignment Missions, Allies and Relationship Missions, and Additional Tasks. Twice during my playthrough, I felt the overwhelming weight of missions piling up. The first time this feeling caught me, I geared up and cleaned the lists before returning to the Priority OPS Missions. The second time, roughly 40 hours into the game, I abandoned the side missions entirely in favor of the main story. With the main story completed, I easily have another 10+ hours, at least, left in these side missions. I probably will return to them if only to survive this month’s gaming drought.

It’s not surprising that I wasn’t blown away by ME: A‘s story. Quite often, larger open-world games have a more dilute story. It simply isn’t compelling. The beginning feels rushed with one of the Ryder twins predictably being pushed into the role of Pathfinder. The dialogue and voice acting was sometimes so so cringy; I saved some such moments for posterity and future laughs. (spoiler) I also think I’ve grown tired of the parent/child narrative. ME: A uses it, Fallout 4 uses it, Horizon Zero Dawn uses it, The Witcher 3 uses it…You get the picture. That’s not to say the loss/sacrifice of a parent or the strain between parent and child can’t be used in a video game, but I wonder if it’s overdone. Or, maybe I’ve played too many games with that trope (end spoiler).

It may seem that my complaints outweigh the positives, but that really isn’t so. I’m mostly critical of the game’s story, use of side missions, and the occasional glitch that cost me time and progress. Glitches weren’t all bad. As you can see from the screenshot below, I died while fighting inside a monolith and respawned inside the Nomad! I had some fun driving around in there. There are a few other minor things but nothing that stands out as much as the story and lack of originality. 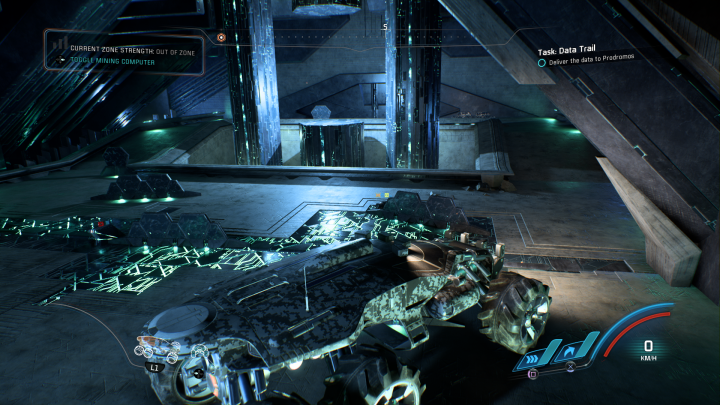 On the positive side, there is plenty to do and see. I looked forward to landing on a new planet—the excitement of a new biome kept me intrigued. I took the Nomad to places it shouldn’t have gone. I genuinely enjoyed the banter between Sara and her companions, and companion to companion. More than a few times, I laughed. Drack, Jaal, and Peebee ended up being my favorites, which is a testament to the moments when the writing was solid. I grew to love my companions as the story progressed, which, in turn, compelled me to complete their loyalty missions because then they had meaning.

If ME: A released a few years ago and if the developers hadn’t switched to a new engine, or had more time to work through such a change, the game would probably be touted as something phenomenal. But we’ve seen many of its tricks several times before. Mass Effect: Andromeda is a 6.5 or 7/10 for me. Its mostly consistent gameplay, solid combat, sci-fi nature, entertaining companions, and sense of exploration kept me going.