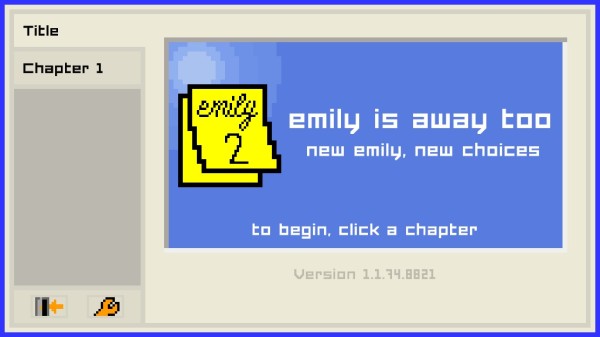 Emily is Away Too (2017) is a celebratory return to the early 2000s and a walk through that tumultuous period when teenagers are expected to transition into adulthood. This indie project, developed by Kyle Seeley, is best described as a visual novel that occurs in the context of an instant messenger, EOL. Oh yeah, and there’s Facenook and YouToob too. 😉

Full disclosure, I have not played its predecessor, so I can’t make any comparisons between the two. Although, Emily is Away (2015) is free on Steam, so I’ll probably look into it eventually.

The game begins by asking players to select a chat icon, a username, and a few lines for their online profile before introducing two girls, Evelyn and Emily. This is where the story begins. I’ll avoid any spoilers, but in general, the narrative explores the high school experience, relationships, and the uncertainty and fear of the future.

What helps to make the interaction with emerz35 and punk4eva interesting is that players are always presented with three dialogue options which shape the outcome of the narrative. On occasion a message like “emerz35 will remember that” flashes on the screen reminding players that their choices matter. The game has five chapters, and at certain points, the player has to juggle conversing with both girls at the same time while being mindful of timely responses for both. 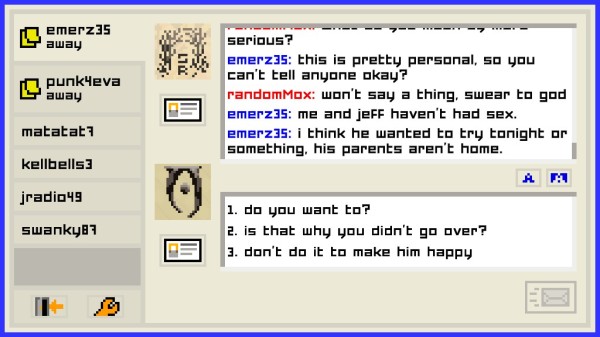 It becomes clear from the beginning that Emily and Evelyn are meant to be foils for each other, but this element could have been developed further. Initially, the two seem different enough: one likes to drink and the other isn’t a fan, their taste in music differs, they have opposite plans for the future, etc. This quickly falls flat as the two have similar relationship issues and even succumb to similar behaviors. The distinctions between the two become muddy even as the player has the opportunity to grow close to both. This lack of character development becomes especially noticeable when Emily and Evelyn ask the player very similar, if not the same, questions over the course of a few chapters.

While my care for the two girls could have been stronger, it was entertaining to return to the 2000s by way of the music that the girls shared on YouToob and the ensuing conversations. There were even spoofs of videos that went viral at the time. It was an interesting throwback, and I did not regret the two-ish hours spent with the game.

For $4.99, if interactive visual novels are your thing, I recommend Emily is Away Too. In spite of the somewhat underdeveloped characters, the concept is an interesting one. If you grew up using AOL and listening to Blink 182 or Snow Patrol you’ll probably find Emily is Away Too to be nostalgia inducing. And if you didn’t, you can still get something out of this neat project.

Teachable?: Emily is Away Too is precisely the kind of narrative-based game that could be used in the rhetoric/composition or literature classroom. Some of the content is for mature players and seems appropriate for high school and college students. The ability to compare ending stats, as seen in the picture above, could spark discussions about the role of game options and player choice and allows for a comparison of outcomes. I only played through the game once, but I hear there are four endings. The game could even serve as a sort of archive/cultural piece of the early 2000s for analysis. Emily is Away Too could easily be played outside of the classroom without much guidance or in a computer lab as the mechanics are straightforward, and the use of chapters makes assigning sections of the game easy. It isn’t difficult to give it a “Teachable” rating.  +Affordable  +Low Tech Requirements +Playable in 2-3 Hours  +Analysis  +Ease of Play

9 thoughts on “Indie Spot! | Emily is Away Too”