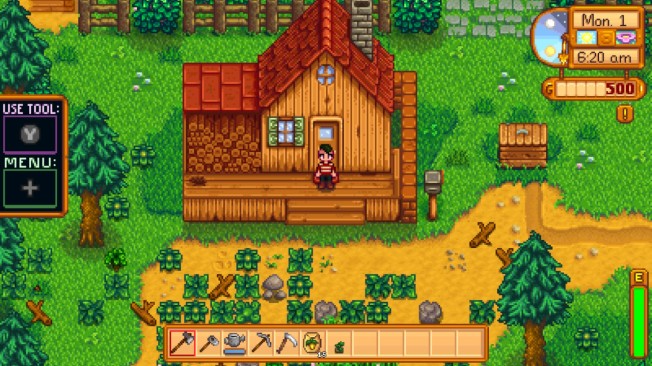 Sometime in 2015 I heard about an indie project called Stardew Valley. It piqued my interest because of its similarities with the Harvest Moon franchise, which has always held a place in my heart. When ConcernedApe’s game released in February of 2016, I immediately made the purchase. I even wrote a short piece on my previous blog (now re-posted here on The Gaming Teacher as “Stardew Valley“) discussing a few of its features and what made it “special.” Since then, Stardew Valley has been released on console (including the Switch! Finally!!) and has enjoyed great commercial success.

With the game’s Switch release on October 5th, Stardew Valley has again become my primary game. In between grading and translating for my Old English class, I’ve managed to spend 35 hours building my farm and establishing my place in the community. It might not sound like very long, but hey, I’m trying. :p

So here I am again writing about a game that I find entirely more endearing than any other I’ve played. But while I love this little title, I also find it difficult to adequately describe the magic that is Stardew Valley. From about August-October of this year, I absorbed every new bit of info made available, from fact to speculation, about when the Switch version would drop. One of my close friends, Joey over at A New Game Plus, was kind enough to put up with my obsession and even challenged me to convince him of making the purchase for the Switch (he’s now equally, if not more, obsessed with it). That moment of discussion was one that reminded me of how challenging it can be to sum up the game and everything that makes it a standout.

Stardew Valley isn’t just about maintaining a farm, forming relationships with the townsfolk, and getting married. It can be each of those things or none of them at all. And that, I think, is a part of what makes the game special (I’ll probably overuse “special” and “endearing”; forgive me). You could get away with mining for days, never building a single barn, and refusing to fish . On the flip side, you could attempt to do everything the game offers. In addition to the freedom to, essentially, do what you want when you want, the game very rarely makes players feel guilty for their decisions. Now, I’m not saying we need more games that encourage us to shirk responsibility, but it’s nice to have the option of living a low-pressure, pixelated life as a farmer in a world that is a joy to inhabit.

For such an inexpensive game available on multiple platforms, Stardew Valley offers hours upon hours of gameplay. I’m not ashamed to say that I’ve handed my money over for it three times now (PC, PlayStation 4, and Nintendo Switch). The game has been more than worth it. When I bought it on release for the PC and PlayStation, Stardew Valley was a game that brought me enjoyment through entertainment. If I had an hour to fill or it was the weekend, I played. Now that I’m back in graduate school, I have very little time for gaming or blogging. And I have to be highly selective with any “free” time that comes up. Yesterday I thought about starting South Park The Fractured but Whole or continuing my slow progression through The Evil Within 2, but ultimately went with Stardew Valley because I knew I could be productive in-game whether I played for ten minutes or two hours. If I’m unable to play for another few days, I won’t feel as though I fell behind or missed out. That’s another aspect of the game that makes it so popular; it’s incredibly easy to sit down and play, to jump right back into what you were doing last play session. Whether player’s are looking for purposeful distraction from “the real world” or happen to look up from playing and three hours have passed, the valley accommodates.

Since playing Harvest Moon 64 as a child, I’ve found myself drawn to similar games. Games such as Rune Factory were fun to play but failed to capture my heart in the same way that my recollection of Harvest Moon does. Recently I managed to snag a copy of the Nintendo 64 classic, though I haven’t been able to play just yet. Regardless, Stardew Valley has come the closest and, despite my nostalgia, probably surpasses Harvest Moon in terms of the feels.

Again, I think my praise for Stardew Valley is lacking. It really is a game that needs to be experienced for full effect. And if it doesn’t resonate with you, that’s okay too. You know where I’ll be.