Besides Pokémon Go, I have never really played a mobile game with much enthusiasm or interest. That changed this past weekend when I decided to download PewDiePie’s game, Tuber Simulator. I’m hooked (for now).
In case you were wondering, PewDiePie is Felix Kjellberg’s YouTube persona/channel name. He’s kind of a big deal on YouTube, having over 48 million subscribers equaling millions of dollars a year in the bank for Felix. He produces some outrageous content, mostly game-related, and is known for screaming into the camera and his “bro fists.” His game gives players a peek into the life of being a let’s player or content creator on sites like YouTube.
In Tuber Simulator, players can customize their appearance and that of their surroundings while creating content for the internet. It’s a relatively simple concept, and yet it works. Tuber Simulator was downloaded more than 1 million times in the first 24 hours of its release. So what accounts for its current popularity and what makes it addictive?
First off, I’m sure the game wouldn’t be half the success it currently is if it hadn’t been made by PewDiePie. His advertisement alone was probably enough to ensure at least a million downloads. Many of his fans are known for their fanaticism. Regardless, none of that would matter if the game wasn’t any good. 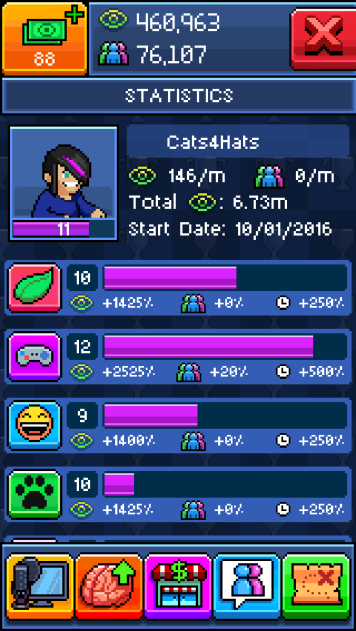 Now, as I talk about this, I want to throw in a caveat. Although I’m currently checking the status of my in-game video views while I write this, this isn’t a game that I’ll keep playing for months. After all, as a mobile game, it has its limitations, and Mafia 3 is on my list. I freely admit I’m one of “those people” that tired of Pokémon Go. Go ahead, judge me.

Anywho. Back to that non-YouTube YouTube game. Part of what makes the game fun is that nearly everything can be customized. In fact, part of the social aspect of the game involves visiting other player’s rooms, rating their setup, and sending and receiving gifts. Another element that aids this customization is that players can make videos based on the following categories: Animal Items, Beauty Items, Comedy Items, Dark Items (think scary), Gaming Items, Lifestyle Items, Music Items, Nature Items, Science Items, and Sport Items. Players can tailor their Tuber videos and their rooms to their personal interests. In turn, items are available from each category for purchase. I’m currently working on a gaming setup, obviously.

Adding to the entertainment factor, the game isn’t afraid to be self-aware. After all, PewDiePie narrates the game and challenges players in typical PewDiePie fashion. The games lists some of YouTube’s top channels, showcasing their views and subscribers, which helps to spark a sense of competitiveness in players as well. Who wouldn’t want to dethrone the king? I doubt I will ever match PewDiePie’s 48 million subscribers, I only have 198,515 right now, but I’m willing to try.

Tuber Simulator is fun because it doesn’t try too hard. It doesn’t take itself seriously, and it actively encourages goofiness through its music, pixelated appearance, competitiveness, and customization options. Even the titles of videos you can produce reek of PewDiePie’s character and the general let’s play culture. “Tuber screaming at a game,” “VR Blindness Simulator,” and “Plumber on shrooms GONE WILD” are just a few examples. The game has kept me interested between juggling video production and views with the purchasing of gear, furniture, and decorations to boost views and subscriptions. It even has its own mini-game, Puggle. It’s a simple game, and it’s fun. Currently, that’s enough for me.