While in Illinois this past weekend, I had the opportunity to spend a few hours with the PlayStation VR. I’m fortunate to have a good friend who is on the up when it comes to most things video games (I got my hands on the Switch too!). I’d like to share some thoughts from my experience with VR.

First off, I’ve been anxiously awaiting the day I could try the PlayStation VR. I was sold by Sony’s marketing and felt that virtual reality was finally reaching a point of mass accessibility. It’s pretty amazing that virtual reality is now available and playable in your living room.

While at my friend’s, I tried Job Simulator, Star Wars Battlefront: Rogue One X-wing VR Mission, Here They Lie, Batman: Arkham VR, Resident Evil 7, and Keep Talking and Nobody Explodes.

Job Simulator was a good game to start with because it allows players to acclimate to the VR experience while having players complete tasks that are ordinary and familiar. I chose to be an office worker and was quickly making copies, doctoring the books, drinking coffee, and stealing glasses off of the bots that stopped by my cubicle. While limited, Job Simulator was a fun experience and a relatively tame one to get started with.

I really got the sense that I was in that cubicle and that I could manipulate the world. A few times I actually lost sense of where I was in my friend’s living room and had to peek down to see where I was standing. For the most part, the headset does a good job of blocking out the real world. Some light did enter through the bottom of the PS VR headset because I had to adjust it to accommodate my glasses. The only other thing that brought me out of the VR experience was talking to my friends while playing (a necessity of course) and occasionally getting wrapped up in the cord running to the headset.

After Job Simulator, I went on to play Star Wars Battlefront: Rogue One X-wing VR Mission and Here They Lie. These were the only two games that made me feel disembodied and a bit unsettled in my stomach. Part of the issue with X-wing VR Mission was that I usually struggle a bit with flight sims anyway. On top of that, I experienced something I can only describe as slipping or dropping. I slowly noticed my perspective slipping further and further down into the cockpit of the X-wing as if I were becoming a child struggling to look over the dash of a car. That was really the only technical issue I had with the PlayStation VR during several hours of play.

In terms of feeling sick, Here They Lie was my nemesis. I was nervous to begin with because it’s a horror game, and I am not about that life. But what really threw me off was the way the game handles movement. In order to turn in game, I had to use the controller to pan 40 degrees at a time. This jerking of movement bothered my brain and my gut. I think virtual reality games employ this to keep players from feeling nauseous from full movement, but I think I would rather have free movement.

Overall, my experiences with PlayStation VR convinced me of virtual reality’s future in gaming. It all felt relatively real, tangible. When I heard a sound behind me, I would turn and that sound would be louder. I looked down over the ledge of a skyscraper and feared for my life. I could blow out candles! 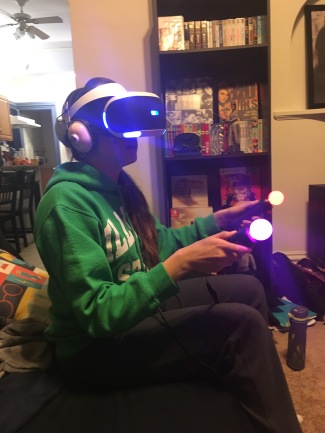 One of my friends went on to try several of the games as well, including Until Dawn: Rush of Blood. Of her experiences with VR, she talked about her tendency to move a lot when playing regular video games and that VR let her be more physical while playing. She also mentioned the attraction players would have to the VR because of that.

I can see how the, for lack of a better word, physicality of virtual reality games would engage players more. If your brain is being tricked into thinking it is moving through a 3D space then of course you’ll feel like you’re actually there and your body will probably want to participate in turn.

As a minor side note, it was also very fun to watch others play and experience virtual reality. Watching the reaction of one of my friend’s brought a smile to my face. VR can be magical and social.

I can’t wait to see where the development of virtual reality takes us. Will we have holodecks someday? Will educators lead class field trips in VR? Will we use virtual reality in med school for mock surgery and treatment? How will therapy be changed? The possibilities, even beyond entertainment, seem wonderful.

One thought on “PlayStation VR: My Experience”